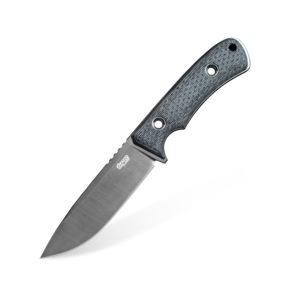 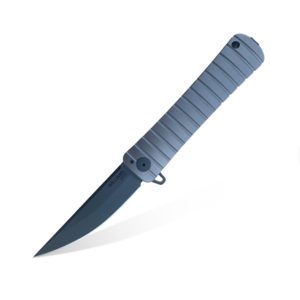 We always prioritise reliability and ease of use. Its low weight and deep-carry clip mean you will always have the Z200 by your side. If you prefer controlled, two-handed opening over using a flipper, the Z200 is made just for you. We have milled a groove into the N690 steel blade allowing you to easily and discretely open the blade. As per tradition, you can configure the whole assembly – meaning the steel surface, the grip material and colour, and the lock – as you wish.

Only 1 left in stock

The warranty does not cover damage caused by accident, improper care, negligence, normal wear and tear, or the natural breakdown of colors and materials over an extended period of time and use. Damage not covered under the warranty may be repaired for a reasonable rate. In such cases, a fee will be also charged for shipping.

If you have any questions please contact us: info@kapuga.pl 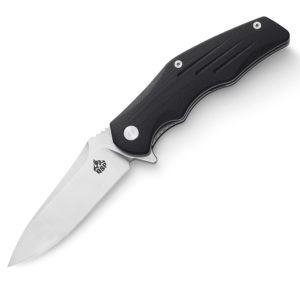 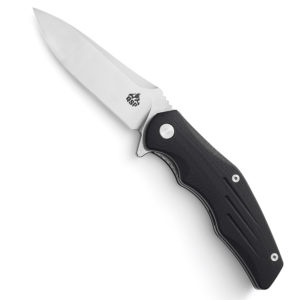 199.99 zł Gross, ( 162.59 zł Net )
Pangolin is a QSP Knife project, whose name we owe to pangolins living in Africa and southern Asia. The shape of the handle resembles the protruding ridge of this small mammal and the knife in a folded form is associated with the pose taken by the animal sensing danger (curls into a ball and enhances protection in the form of the hard scales covering his whole body). Pangolin is a large QSP knife model with a modern but subtle look. It will be appreciated by people looking not only for functionality, but also paying attention to an interesting shape. Pangolin, thanks to the use of solid construction materials and its features, will successfully be used to meet more demanding daily challenges.
Add to basket
Quick view
-20% 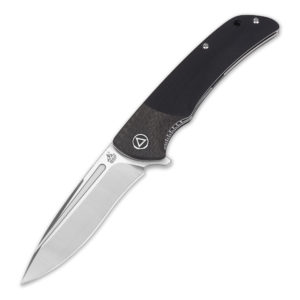 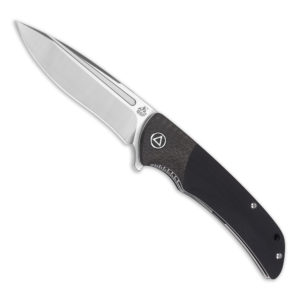 519.20 zł Gross, ( 422.11 zł Net )
The QSP Knife Harpyie was inspired by the silhouette of a bird of prey from the hawk family. His physiognomy draws attention to the characteristic colours of its plumage, which is reflected in the knife handle. In its construction, attention is drawn to the proportion of colours, where one part of the cladding made of carbon fiber with a characteristic colour and reflects the upper part of the bird's torso, the rest of the composite G10 is in a different colour and reflects the rest of the bird's torso. In addition, the knife blade, in which you can see the shape of the bird's beak, has a characteristic notch in which a trained eye will see the animal's nostrils. Harpy belongs to the category of large folding knives from the QSP Knife premium collection. Made of top quality materials, among which CPM S35VN steel attracts special attention. Moreover, its universalised and ergonomic design predisposes it to be used on a daily basis, including more demanding work. Harpy is a knife great for "working" and is readily waiting both in the pocket of jeans and in the recesses of a casual jacket.
Add to basket
Quick view
-20% 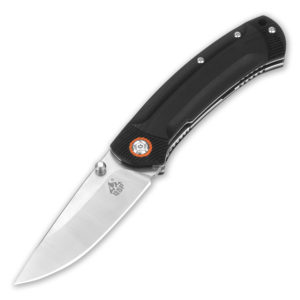 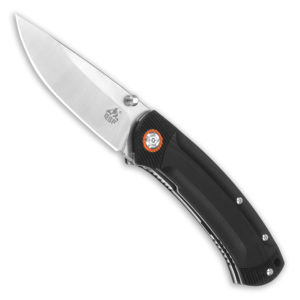 239.20 zł Gross, ( 194.47 zł Net )
QSP Knife Copperhead (copper-headed) got its name by associating with the physiognomy of one of the species of snakes inhabiting North America. In the construction of the knife, after the opening it catches our attention the shape of the upper edge, which starting from the tip of the blade forms one line until the end of the handle. The impression is enhanced by the slightly bent ergonomic profile of the whole, which is associated with the flexing body of the copper-headed loafer. The knife has one more distinctive element. Namely, it is a characteristic orange coating around the fastening screw on the knife's main axis, which adds colour to the whole design. The construction of the Copperhead model is a well thought-out structure, "clinging" to the handle, which perfectly fits into the pocket or everyday organizer of the user. Certainly, this project will particularly please those who prefer better quality materials due to the use of Swedish Sandvik 14C28N steel.
Add to basket
Quick view 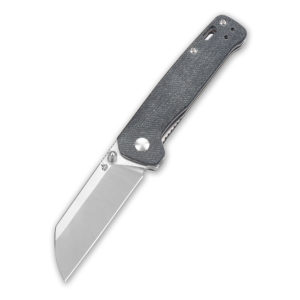 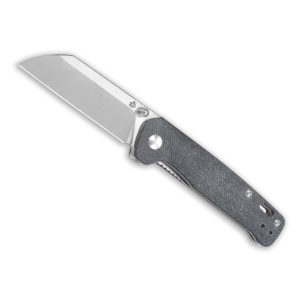 158.99 zł Gross, ( 129.26 zł Net )
Knife Penguin is a QSP Knife project. Its name is a reference to friendly flightless birds mainly inhabiting the cold seas of the southern hemisphere of the Earth. Indeed- the unfolded knife, when is is pointed upwards it resembles a penguin's beak and the handle the body of the bird. However, the name of the knife does not only refer to the appearance of the knife. On the contrary- it also enhances its functional features. The blade, when necessary, can be "feisty" and "of strong character" just like a penguin's beak, the handle will perfectly match the hand during work, just like the body of a small swimmer will fit into every hole. The roughness of the micarta lining, like a penguin's raised feathers, will make slipping of the knife if ones hand when in use in a humid environment. Small, handy and clever, but it will face any challenge, just as a small penguin can deal with the vastness of the seas and oceans.
Add to basket
Quick view
Sold out 198.00 zł Gross, ( 160.98 zł Net )
The Shark knife is  a project made by QSP Knife, referring to its name to the seas and oceans of probably the most famous water predators of our time. The shape of the blasé really looks like a shark's tooth, or even its entire head, and the opening in the blade "looks at us" like a watchful eye shark. Sharpness of the cutting edge additionally complements and justifies these valid associations. The image is rounded off by a round, massive shape in which we can find the signs of a predator's elastic and strong body. Just as the shark moves in suspense and constant readiness, so is the QSP Shark knife always ready for action. Shark is a knife not only of exceptional usefulness in everyday life. Considering its style, it is also dedicated as a support tool in tactical operations.
Read more
Quick view
Sold out 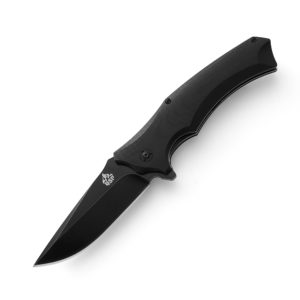 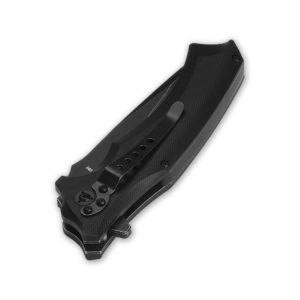 209.00 zł Gross, ( 169.92 zł Net )
The Sthenia QSP Knife is a project referring to the insects of the butterfly family inhabiting Bolivia, Peru and Venezuela. In the design, we can look for profiling characteristic for the silhouette of this moth, and in the bright colours of one of the Sthenia knife models - the colours of butterfly wings. The Sthenia knife is designed as a simple tool for working in difficult conditions. The solid, slim design, smooth opening with a flipper and ball bearings dedicate it as a useful tool for both right and left handed people. There are 3 knife variants: 2 with a black blade finish and a black G10 handle and one with a satin blade and an orange handle. The bright version is especially dedicated to those who tend to create disorder around themselves during work, in which it is easier to find a tool that is different from others.
Read more
Quick view
Sold out 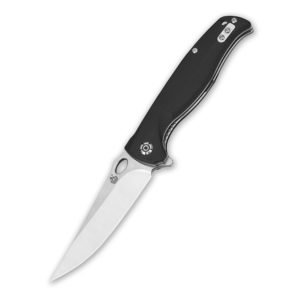 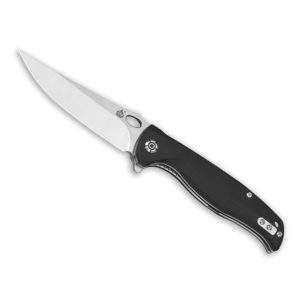 248.99 zł Gross, ( 202.43 zł Net )
The QSP Knife Gavial is a knife that owes its name to an Indian crocodile living in the environment of great rivers. This reptile has a characteristic long, yet quite thin mouth, which is reflected in the knife in the form of a long as well as slender blade. The association of the name with the aquatic animal immediately suggests one of its alleged purposes. The design features of the knife make if a desirable tool for an outdoor trip and are dedicated especially for fishing and fish lovers in general. The long blade will be effectively used to eviscerate, fillet fish and prepare your favourite meal. In general, Gavial remains a universal knife for everyday use and for all trips and outings into nature.
Read more
Quick view 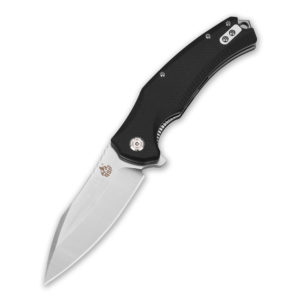 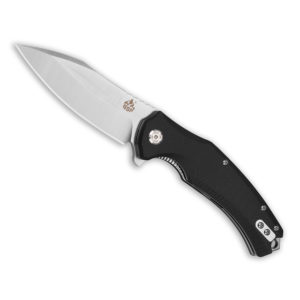 279.00 zł Gross, ( 226.83 zł Net )
Snipe designed by QSP Knife is a knife inspired by the physiognomy of one of the medium-sized migratory bird varieties, a characteristic handle arched downwards with its beak. It is this part of the animal's body, just like Snipe’s blade, that definitely outperforms the whole, giving it a distinct, working character. QSP Snipe is a daily use knife that can also successfully carry out heavier work. Due to its solid construction and size, it can also be used as hardware support during tactical operations. Snipe has another interesting feature that also gives it the feature of a rescue knife. It is a window breaker located at the end of the handle. Holding Snipe in your hand, you will have no doubt that this is the right choice for a trip, to work, or to the car as a handy tool for the situation "if indeed".
Add to basket
Quick view

About us
Our brands
New arrivals
Deals
Blog
Contact

close
Start typing to see products you are looking for.
Cresta Social Messenger PRO
Powiadom o dostępności We will inform you when the product is in stock. Please leave your valid e-mail address below.