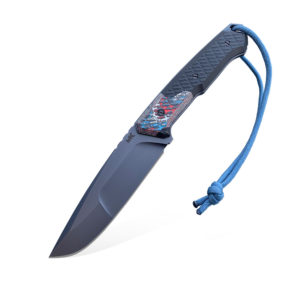 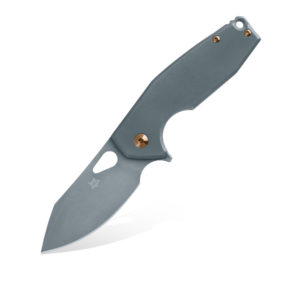 FOX Knives Suru FX-526 TCBL Folding Knife M390 Carbon Fiber by Jasper Voxnæs is a project created in cooperation between a Danish designer and an Italian producer from the Maniago.

Suru is a very successful and well-liked folding knife, which has been enjoying constant popularity for several years. Appreciated in 2018 at the most significant Blade Show event in Atlanta in the United States in 2018 (“Overall Knife of the Year” award), it enjoys unflagging interest. Hence probably its cyclical reissues in various material configurations. Suru is a small everyday knife, very versatile thanks to its construction. Despite its small size, it can be conveniently operated with even a larger hand while grabbing it for the finger undercut (finger choil) in the blade and the handle. The size of the knife, and especially the length of the blade, is justified by the legal requirements in many countries, where its length is simply legal.

FOX Knives Suru FX-526 TCBL Folding Knife M390 Carbon Fiber by Jasper Voxnæs has a blade made of premium M390 steel (with satin finish), a handle made of carbon fiber. The knife blade is locked by a frame lock, and the knife is easy carried thanks to titanium carrying clip (blue anodized). The knife comes with a leather pouch.

Only 1 left in stock 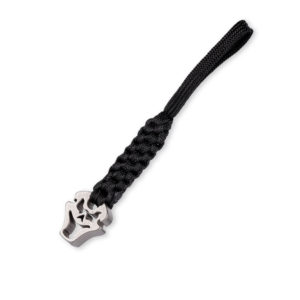 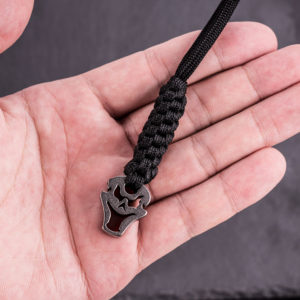 89.10 zł Gross, ( 72.44 zł Net )
RovyVon RP10 Titanium Skull Bead Size L is an interesting gadget that can be attached to the selected element with a braided pendant. Bead can have decorative and utility functions. It will be a great complement to the appearance of a titanium flashlight (but not only) or everyday knife. In the case of a flashlight or a knife of a smaller size, together with a braided section of lanyard, it will improve its grip by increasing the size of the whole. In the case of a knife with a fixed blade, it will additionally be a grip element helping to remove it from the holster or sheath. The skull symbolizing the ephemeral life, quite often presented in the form of various gadgets, is a trifle that enjoys constant interest of users. RovyVon RP10 Titanium Skull Bead Size L comes with a braided tag.
Add to basket
Quick view 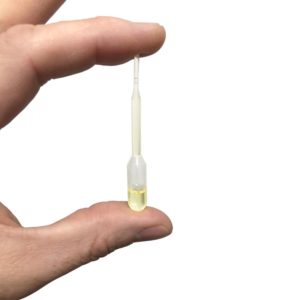 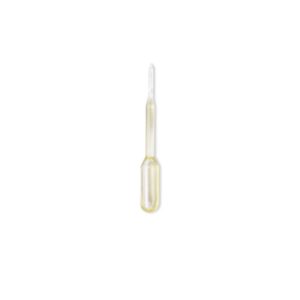 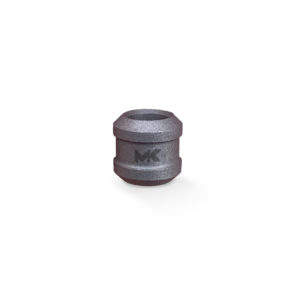 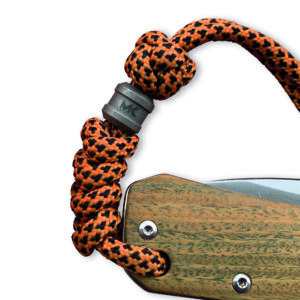 24.99 zł Gross, ( 20.32 zł Net )
MK Knives & Tools steel bead made by knifemaker Marcin Kampka. M connected with K, K inextricably linked with M! Consistency of concept, design and execution! Just like in MK Knives & Tools knives raw steel "forged" into one, perfectly presented whole! In this case, small, subtle but very pretty. A bead for owners of knives made by MK Knives & Tools or knives from other manufacturers and for various EDC stuff, which can be made with paracord. In the case of knives, it will be an ornament and make it easier to remove the knife from its holster or sheath. In the case of traversing the flashlight, together with the paracord, it enlarged its size and improves grip. A great decoration with practical use!
Add to basket
Quick view 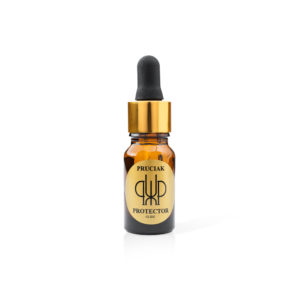 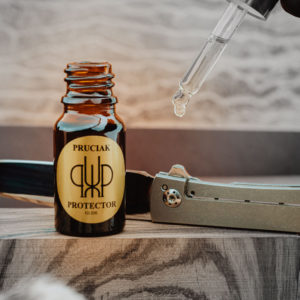 29.99 zł Gross, ( 24.38 zł Net )
Pruciak Protector Glide oil for lubricating knives developed by Pawel Pruciak. 100% natural mixture of oils for lubricating screws (including pivots) and other elements working in folding knives. Adequately sticky, does not dry out and sticks to the lubricated surface. The temperature resistance of the oil, up to 200 ° C, allows it to be used in places where there is an increased phenomenon of friction between the material and the material (e.g. bearing points). In addition to lubrication, it preserves and protects against corrosion. Oil dedicated to folding knives, multitools, clasps, threads, elements of firearms, etc. Pruciak Protector Glide oil for lubricating knives comes in a handy 10 mm bottle with a dropper for easy application on the selected ones.
Add to basket
Quick view 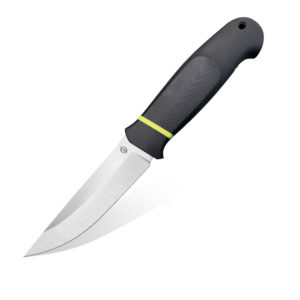 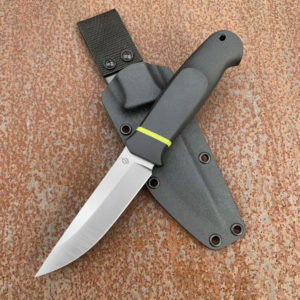 1,449.00 zł Gross, ( 1,178.05 zł Net )
Sliwkosky Knives Mora Custom Knife Elmax Black was inspired by Finnish puukko knives. Knifemaker Jakub Sliwka used a design from Scandinavia and made a very interesting knife. The result is a blade with a high Scandinavian grind and a hidden-tang handle with a very pleasant grip and a very grippy handle. The whole length is quite large (235 mm long), and the relatively thick, oval 120 mm handle fits well in the hand, even when working with a glove. In addition, the hidden-tang design makes it comfortable to work without gloves, even in quite cold weather due to the lack of direct contact of the hand with metal. The presented Mora Custom knife is intended for users who practice forest tourism, bushcraft passion, camp in nature, etc. It will not be afraid of preparing a meal, preparing wooden shavings or lighting a fire with a flint with a ridge that is more sharply finished for this purpose. The presented Sliwkosky Knives Mora Custom Knife Elmax Black has a satin Elmax steel blade, black G10 handle with yellow G10 liner and black kydex holster.
Add to basket
Quick view 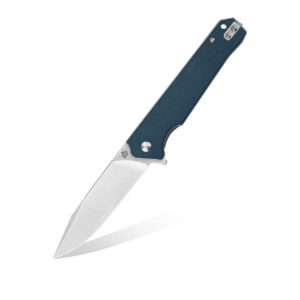 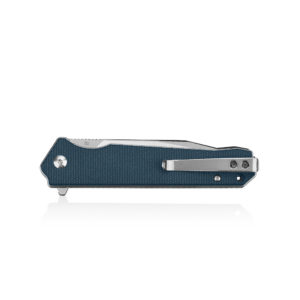 279.00 zł Gross, ( 226.83 zł Net )
QSP Knife Mamba V2 QS111-H1 Folding Knife Satin D2 Blue Micarta is knife for everyday carry (EDC). Mamba V2 is a new version of one of the QSP Knife brand projects. Compared to the previous version, the blade has a slightly different shape, namely it has evolved from a drop point to a clip point and gained a false blade, and the handle, unlike the first edition, ended with a relatively straight section. Mamba V2 is also made of diffrent material materials than previous version. The Japanese VG10 blade has been replaced with the much-liked D2 steel. The knife was also presented with a new range of materials on the handles (micarta of various shades). QSP Knife Mamba V2 QS111-H1 Folding Knife Satin D2 Blue Micarta has a blue micarta handle. The satin blade of the knife is opened thanks to the flipper protruding from the blade, and it is secured by a liner lock against folding during work.
Add to basket
Quick view 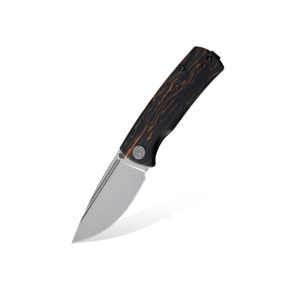 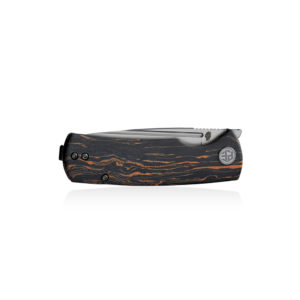 339.00 zł Gross, ( 275.61 zł Net )
Petrified Fish Beluga PF-P01X ODMP Orange Damask Pattern Folding Knife Folder is everyday use tool. The Mini version differs from the basic Beluga model mainly in size (173 mm vs 210 mm). Beluga with a fairly wide blade and a groove located in the upper part of the blade (fuller) and, above all, opening in the form of an front flipper, stands out among other Petrified Fish models. A working drop point blade with a very universal application and K110 steel, which is the core of the structure, enhances the utility values of the knife. Beluga is certainly an interesting tool for everyday use, but also a great support for outdoor trips. Petrified Fish Beluga PF-P01X ODMP Orange Damask Pattern Folding Knife Folder has an efficient drop point blade made of K110 steel. The knife handle is made of G10 composite formed in damascus pattern. The design of the knife is completed with a G10 backspacer and a titanium carrying clip. The opening of the knife occurs due to the protruding front flipper and the blade is blocked by a liner lock.
Add to basket
Quick view 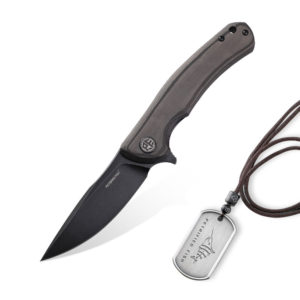 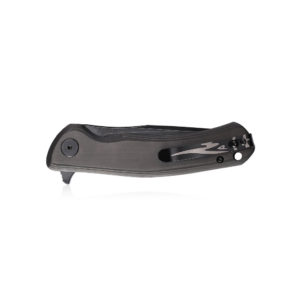 359.00 zł Gross, ( 291.87 zł Net )
Petrified Fish Warrior PF-949 CDW Carbon Fiber folding knife is a knife for everyday use distinguished by an interesting, streamlined shape and construction materials. Warrior is a knife with an ergonomic design with a very nice handle in the hand and a working drop point blade with a very universal use. The use of K110 steel, which is characterized by high hardness and high abrasion resistance, certainly deserves special attention in the construction. This translates directly into the durability of the blade during operation and long-term sharpness. Petrified Fish Warrior PF-949 CDW Carbon Fiber folding knife has an efficient drop point blade made of K110 steel (with black titanium coating). The handle of the knife is made of carbon fiber. The knife's backspacer is made of carbon fiber and the deep carry clip is made of titanium. The knife is opened due to the protruding flipper and the blade is blocked by a liner lock. Knife comes with steel ID card and lanyard.
Add to basket
Quick view 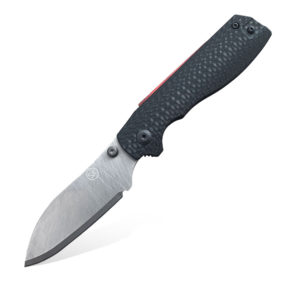 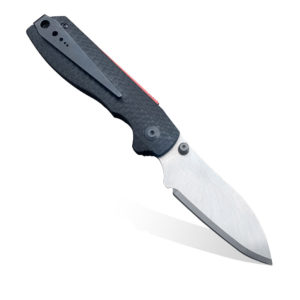 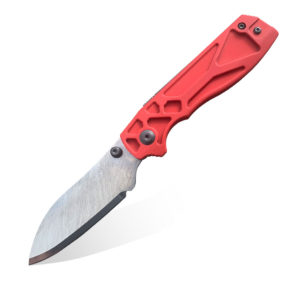 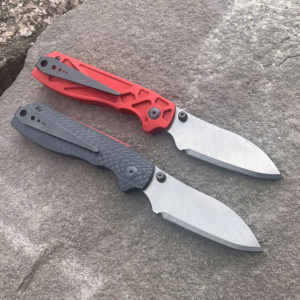 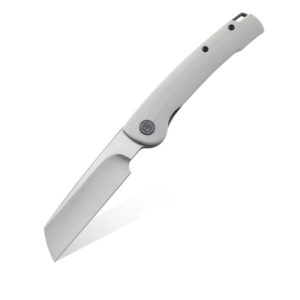 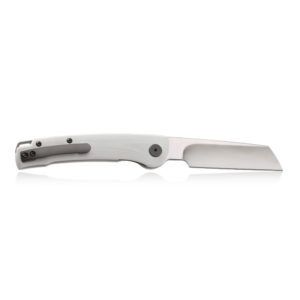 399.00 zł Gross, ( 324.39 zł Net )
Petrified Fish Scholar PF-E04 W White Folding Knife Folder is designed for everyday carry use (EDC). Scholar is rightly associated with a razor. Its construction is based on the construction of this traditional tool. Scholar has a straight cutting edge, a sheepsfoot blade and a hollow gind. These features are especially useful for cuts that require pressure, when cutting thicker material, when straight cutting line is needed. Scholar will be great as an everyday and certainly elegant tool. Petrified Fish Scholar PF-E04 W White Folding Knife Folder has an efficient, satin sheepsfoot blade made of 154CM steel. The handle of the knife is made of white G10 composite. The design of the knife is completed with a titanium backspacer and a carrying clip made of the same material. The opening of the knife occurs due to front flipper and blade is blocked by a liner lock.
Add to basket
Quick view 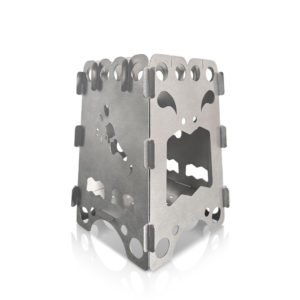 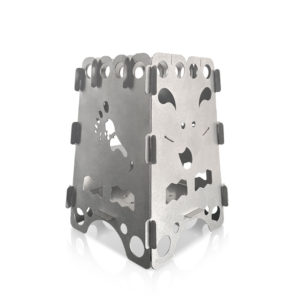 99.00 zł Gross, ( 80.49 zł Net )
Wanderer's Stove Small | Steel Portable Stove is a useful solution for lovers of outdoor cooking. Light, compact, easily folded. Packed in a lightweight aluminum box for easy carrying and protection against dirt. Made of stainless steel for strength and durability. A stove powered by combustible materials obtained from the environment: cones, sticks, shavings, bark, larger and smaller pieces of wood, leaves and dry needles, which can be easily loaded inside from the grate (from the top) or from the front through the hole provided for it. The stove can also be lit or powered by solid fuels from various manufacturers. On two walls of the cooker, the oxygenation holes are shaped as the symbol: "Wanderer's Foot". It is a tribute to people leading a wandering lifestyle, lovers of communing with nature. "Wanderer's Foot" theme. Credo: Each of us makes our own paths and leaves traces on them. It is only up to us in which direction we will go. Traveling along the beaten path, but also a rush into the unknown – this is how you could describe the general human tendency to “be here and there”. The foot symbolizes movement and man’s restless nature. You can find the shape of a familiar continent in its outline, but nothing stands in the way, draw your maps and go where your legs (feet) will carry you!
Add to basket
Quick view

About us
Our brands
New arrivals
Deals
Blog
Contact