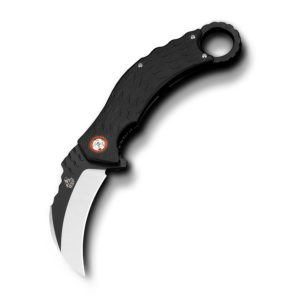 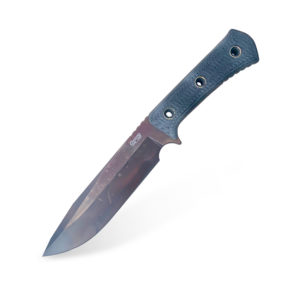 Mini Wharncliffe TRC Knives it is every day carry knife made by lithuanian knifemaker Andrius Tricius.

Satin finish on the blade and stone wash on the handle make really nice design of project. Mini size makes him really handspocket and useful in every day life. Extremely sharpen ELMAX steel with Wharncliffe cutting edge simplify cutting process even with tough materials. Included handmade Kydex ® sheath let you keep your knife sticked to your belt or use it us a neck knife with help of attached string.

With Mini Wharncliffe you are always ready!

The warranty does not cover damage caused by accident, improper care, negligence, normal wear and tear, or the natural breakdown of colors and materials over an extended period of time and use. Damage not covered under the warranty may be repaired for a reasonable rate. In such cases, a fee will be also charged for shipping. We also offer a life-time free sharpening service. Whenever you feel your knife starts lacking that excellent sharpness, send the knife over to us. You will only be charged for shipping costs.

If you have any questions please contact us – info@kapuga.pl

Every knife that leaves our workshop is extremely sharp and carefully examined before it is sheathed and packaged into the box. We keep strict quality control throughout all manufacturing process to make sure the knife is in flawless condition, so that you can enjoy the extreme sharpness and overall quality of your newly purchased TRC knife.

The modern knife steels that we use are top-quality materials. However, all metals corrode over time. It is important, therefore, to take certain precautions. After using your knife with sea water, blood, fruits or other corrosive mediums, you should always rinse the knife with fresh water and dry it off. Before storing your knife, apply a thin film of high-quality gun oil. The knife should never be washed with harder chemicals, for this may damage the finish of the blade. We recommend that you always keep your knife and sheath clean and dry when not in use. Always keep your knife sharp, so it can always take care of you. 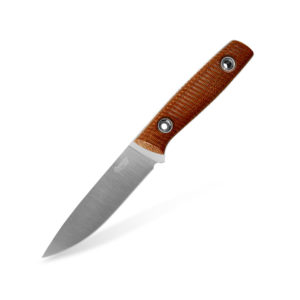 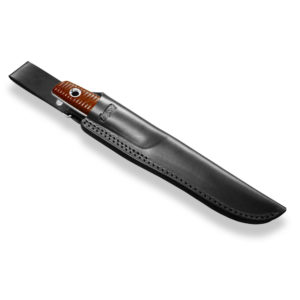 1,299.00 zł
TRC Knives This Is Freedom Natural knife was created in the studio of the Lithuanian knifemaker Andrius Tricius (TRC Knives), inspired by the figure of a great lover of fishing and communing with nature, the famous writer Ernest Hemingway. The model together with its smaller counterpart Classic Freedom Natural or Classic Freedom Natural FFG belongs to the "Tales of Man" series (more about the series HERE), created to commemorate the extraordinary figures of bygone eras. The smooth profile and slender, utilitarian design of This Is Freedom combines traditional design with modern design. Its features and structure make us feel that it is made for cutting and piercing. This Is Freedom is the first choice knife for fishermen and true nature lovers. Available with a brown micarta handle or with a black lining (This Is Freedom, which you can see HERE) will help in the implementation of the intended shorter and longer trips to the bosom of nature.
Read more
Quick view
Sold out 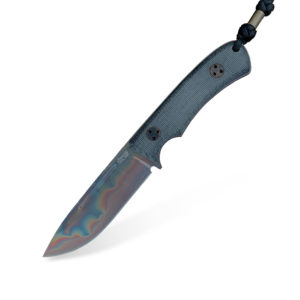 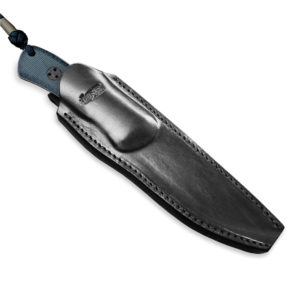 1,268.00 zł
K-1s Sprint Run RWL-34 Apocalyptic Finish limited edition made by lithuanian knifemaker Andrius Tricius. Only 150 pieces were made, numbered 1/150-150/150. This knife is made from exotic RWL-34 steel and comes with beautiful Apocalyptic finish. Serie is closed.
Read more
Quick view
Sold out 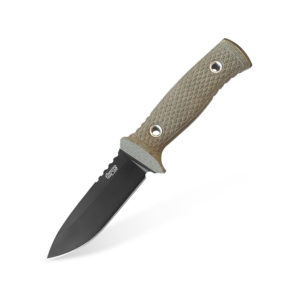 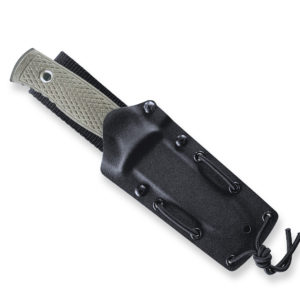 1,499.00 zł
The M-1XDP knife is a project of Andrius Tricius invented in cooperation with operators of military special forces. The M-1XDP designed in a military-tactical style, is a cousin of the Mille Cuori knife from regular TRC Knives line. The M-1XDP knife is a response to demand of operators of special forces but also available for civil users. Contrary to frequent guesses, military users mostly use their knives in tactical operations as supporting tools, which cannot fail during mission. Hence, the knives chosen by soldiers must meet certain requirements in terms of strength (construction materials) and usability (desirable characteristics). Knives of this type are used as you can imagine, for example, cutting lines, breaking windows or removing other obstacles. Knives are used during field (survival) trainings, and during daily activities while waiting for the task (e.g. for minor repairs). The M-1XDP knife will satisfy fans of military equipment, but it will also be useful for civilians during field trips. Each blade is engraved by unique number from 1/30 to 30/30.
Read more
Quick view
Sold out 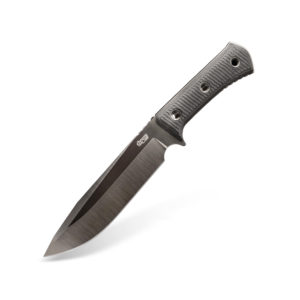 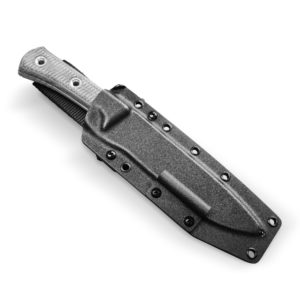 1,999.00 zł
There’s a place in the Bay of Bengal by the name of North Sentinel Island. It’s a place you shouldn’t go to. The Sentinelese reject any kind of contact with the rest of the world, and have lived this way for thousands of years. Marco Polo described them as “a most brutish and savage race, having heads, eyes and teeth like those of dogs.” To this day, no outsider has had success trying to enter the mysterious island. Whoever dears to approach North Sentinel, is attacked by the home-proud islanders with apocalyptic rage. And who could blame them? The way they feel when approached by the Other, is pretty much the same way we would feel if approached by aliens. What would you do in this scenario? We created the Apocalypse knife for do-or-die survival situations. To improve your chances of survival during the apocalypse, we handcrafted this knife from a thick slab of premium quality steel. Apocalypse sports a blade that is 172 mm long. What’s more, it features textured handle scales that, together with thumb jimping, provide the apocalyptic warrior with a comfortable and reassuring grip. With a total length of 300 mm, this beastly-looking survival knife will make your enemies think twice. Just looking at it, you know it means business. Apocalypse comes with a handmade Kydex ® sheath. If our planet is ever under attack, we will need the real man to show up. The kind of man who loves his home as much as those crazy Sentinelese islanders love their island.
Read more
Quick view
-8% 274.00 zł
Toukan I is a QSP Knife creation inspired by the physiognomy of bright toucan birds living in several warmer regions of our globe. The knife owes its name to its colours associated with this animal (a combination of a dark colour in the cover with an orange spacer). Toukan I is a knife with a fixed blade made in a classic style designed for survival applications and other all kinds of outdoor activities. It is a product for people who want to allocate not very excessive funds for their equipment, but are counting on decent quality and usable features. Toukan I is made of 9Cr14Mov stainless steel, easy to sharpen, with G10 composite handle and a durable Kydex holster is definitely able to meet these requirements. Toukan I is a knife that will not disappoint you when you start your forest adventure.
Add to basket
Quick view 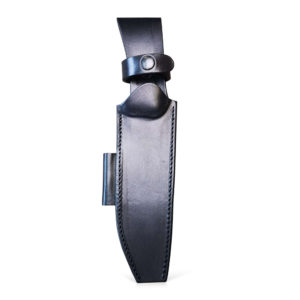 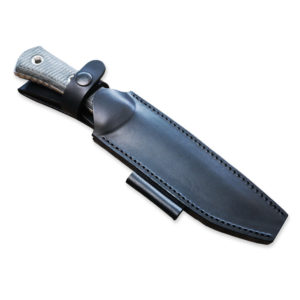 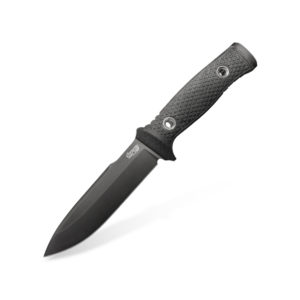 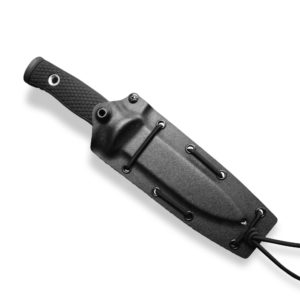 Rated 5.00 out of 5
1,999.00 zł
Heroes aren’t made in a day. Giuseppe Garibaldi was a fisherman, and a candle maker before he became one of the greatest war leaders of all time. With all cards stacked against him, he mobilized a thousand volunteers (The one thousand) and won battle after battle against corrupt and passionless regimes. To liberate and unite his beloved Italy, the great general chose men like him. Give me the ready hand rather than the ready tongue, he said. And to those who wished to follow him, he promised nothing but hunger, thirst, forced marches, battles, and death. Because that’s what it took. For many years, we have dreamed about designing a perfect military knife in the image of a fearless military man. To celebrate our collaboration with military clients, we came up with Mille Cuori which is a knife designed specifically for tactical operators. This knife is made from premium quality steel which is perfect for hard use and guarantees razor sharp cutting edge. The hand ground blade measures 132 mm long. To protect the steel from elements we coated it with extra tough DLC coating. Featuring waffle textured scales, Mille Cuori has an outstanding grip, ensuring absolute control in both wet and dry conditions. For universal functionality, the knife has a pommel which can be used as a hammer. Mille Cuori comes with a handmade Kydex ® sheath. Carrying the power and intelligence of a thousand warriors, Mille Cuori is a must-have knife for both soldiers with military ranks, and civilians with military hearts.
Add to basket
Quick view 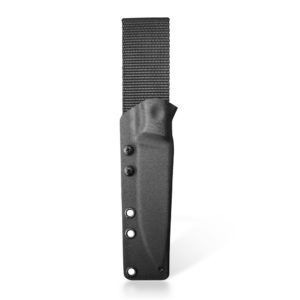 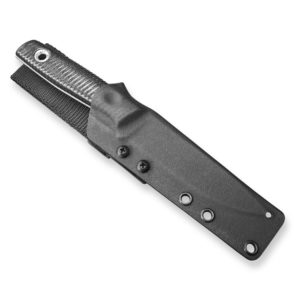 Kydex® sheath for This Is Freedom from TRC Knives

189.00 zł
Optional original Kydex® holster for TRC Knives This Is Freedom (and each varations of This Is Freedom). This Is Freedom knife in the basic starter kit is equipped with a dangler leather scabbard that matches the original knife design. We offer the option of buying an optional Kydex® holster for those who prefer more modern solutions. Holster will be an ideal solution for people who "do not save" their knives in the field and it happens to them at home to thoroughly clean their equipment. As we can guess with the material, we can avoid a greater risk of sniffing, emitting bad smells, etc., than in the case of a leather vagina, which is a natural material. The original Kydex® holster will also complement the This Is Freedom set for a collector who wants to have a knife with all the original equipment available.
Add to basket
Quick view

close
Start typing to see products you are looking for.
Cresta Social Messenger PRO
Powiadom o dostępności We will inform you when the product is in stock. Please leave your valid e-mail address below.